The Black Antelope Group is pleased to announce that it has signed up to the Halo Code pledge across all its business activities. Protecting and promoting the identity of all staff, volunteers and interns is a fundamental part of the company’s ethos and the organisation recognises that in addition to tackling overt discrimination, it is also important to challenge more nuanced forms of discrimination such as “hair discrimination”.

By signing up to the Halo Code pledge, The Black Antelope Group is making a promise to members of the Black community that they have the freedom and security to wear all afro-hairstyles without restriction or judgment when participating in our recruitment processes, in accessing our services or as a member of our workplace.

Simao Paxi-Cato, Director at The Black Antelope Group had this to say about the organisation’s commitment:

“As an organisation we had no hesitation in supporting this campaign. An individual’s hairstyle is an important part of their personal identity and workplace practices, such as dresscodes, are just one of a number of subtle ways in which members of minority communities can feel straight-jacketed to conform (and therefore be accepted) and not bring their whole-selves to work. I hope that other organisations will follow our lead, but also that schools and other institutions around the UK and across the globe will follow suit. To read that 46% of parents surveyed felt that their child’s school uniform policy penalises afro-hair, shows that hairstyle is one of the many forms of discriminations that Black people experience from a young age and one of a long list of adjustments they need to make to fit in with stereotypes imposed by a majority white society.

All of us at The Black Antelope Group are outraged by the recent murder of yet another Black person at the hands of the police. The inhumane and brutal murder of George Floyd in Minneapolis on 25 May 2020 is yet another sickening example of the systemic racism that Black people continue to battle against in societies around the world, including our own here in the UK.

As an organisation founded on the values of equality, respect, and inclusion, we feel compelled to speak out. We as individuals and organisations have to stand and fight together with the victims of murder, oppression, and abuse of power because of their skin colour, as well as with those who seek justice and change through peaceful protests across the world.

We have been moved by the people of every race and ethnicity who have come together across the world and in the UK to express their intolerance of institutionalised racism through peaceful demonstrations and to call for immediate justice and change because black lives matter and silence is not an option.

It is not just in policing that change needs to be effected here in the UK, it is also in the way that the state deals or fails to deal with the inequalities experienced by the BAME community. The recent Public Health England report “Disparities in the risk and outcomes of Covid-19” highlights the fact at para 4.1 that:

BAME people make up 14% of the total UK population, but yet they represent 40% of the NHS, the same frontline heroes for which we all as a nation are thankful for saving our lives and those of our loved ones. The report highlights that BAME people are also over-represented in many of the frontline services and occupations that we have to thank for keeping our country running during this difficult period. We call on the UK government to do justice to these heroes by ensuring that they take every single possible action to address this inequality and that it is made a priority before profit to show that #blacklivesmatter and #BAMElivesmatter and that we do justice to all those who have already lost their lives selflessly and cared for our sick without discrimination.

Our Charity of the Year 2019 has been selected by our Saadia Sharmin. Here is what Saadia had to say about why she choose the Maternal Aid Association (Maa):

“My mother is my biggest role model and has made me the strong woman that I am today. It is devastating that in Bangladesh, where my mother was born and raised, maternal mortality is still disturbingly high. I love how so many students, Universities and professionals across the UK, are uniting together to do something about it. I am truly inspired by the hard work and dedication of every single member of Maa and I hope that all funds raised this year can support them to set up more Medical Camps abroad and help save more mothers and children”.

The Directors of the Black Antelope Group had this to say about Maa:

“As a company founded by millennials, we were impressed by the drive and initiative shown by the founding student members of the charity who are demonstrating that millennial startups can and do make a very real contribution to the world outside the field of FinTech. Their incredible achievements to-date whilst being entirely student-led is an inspiration to us all and we believe as an organisation we share a common ethos”.

We wish to say thank you once again to all those who attended our 2018 Annual Networking & Charity Evening held on the Jewel of London boat on 24 October 2018. All the proceeds from the evening went to our 2018 charity of the year, Mind, for whom we were able to raise over £9,000 this year to support their amazing work in the field of mental health.

Thanks to our media partners for the event, B4U Music, we have managed to capture some of the many magical highlights from the evening. Missed out this year? Why not #followtheantelope and stay informed of our future events.

The Black Antelope Group is proud to announce that a member of our herd, Saadia Sharmin, has been promoted to the role of Ambassador for Women in the Law UK.

Saadia was pleased to accept the invitation because she believes it is important for women to have role models and a support network professionally; especially for women working in industries which have traditionally been very male-dominated. As an Ambassador, she hopes to demonstrate that there are lots of other roles and opportunities to work with lawyers and in the legal sector:

“I am pleased that an organization such as Women in the Law UK exists and they have recognized the contribution that a non-lawyer can make to their objectives. They provide a platform to network with women in the industry” – Saadia Sharmin

#Haveyouherd?… the 24th October is the 2018 date to remember as The Black Antelope Group proudly present their Annual Charity Evening, which this year will follow a Diwali theme. Prepare to be amazed and astounded by an entertainment packed evening, have your fill of food and drink, try your luck with our charity auction and indulge in dancing and/or networking as we cruise the River Thames.

Auction prizes (amongst others) include:

Get into the spirit and come in traditional attire or take the easy route and opt for smart casual.

Standard tickets cost £40 and include an Indian street food buffet or go all out and come as a VIP for £60 and enjoy an exclusive bar, stunning top deck views and front row seats to the entertainment as well as a special surprise. All proceeds will go to our 2018 Charity of the Year, Mind.

Pssssttt!!! Did you know? The whole evening will be captured on film by our media partners B4U and televised on their programme City Beats… so spread the word!

You can purchase tickets to the event by clicking the button. Please note you must accept our functional cookies on our cookie control tool to successfully complete your purchase.

You can find out more about how your donations will support Mind’s work here.

So #followtheantelope as we set sail from Festival Pier, Southbank for the event of the year. Miss it? Miss out! 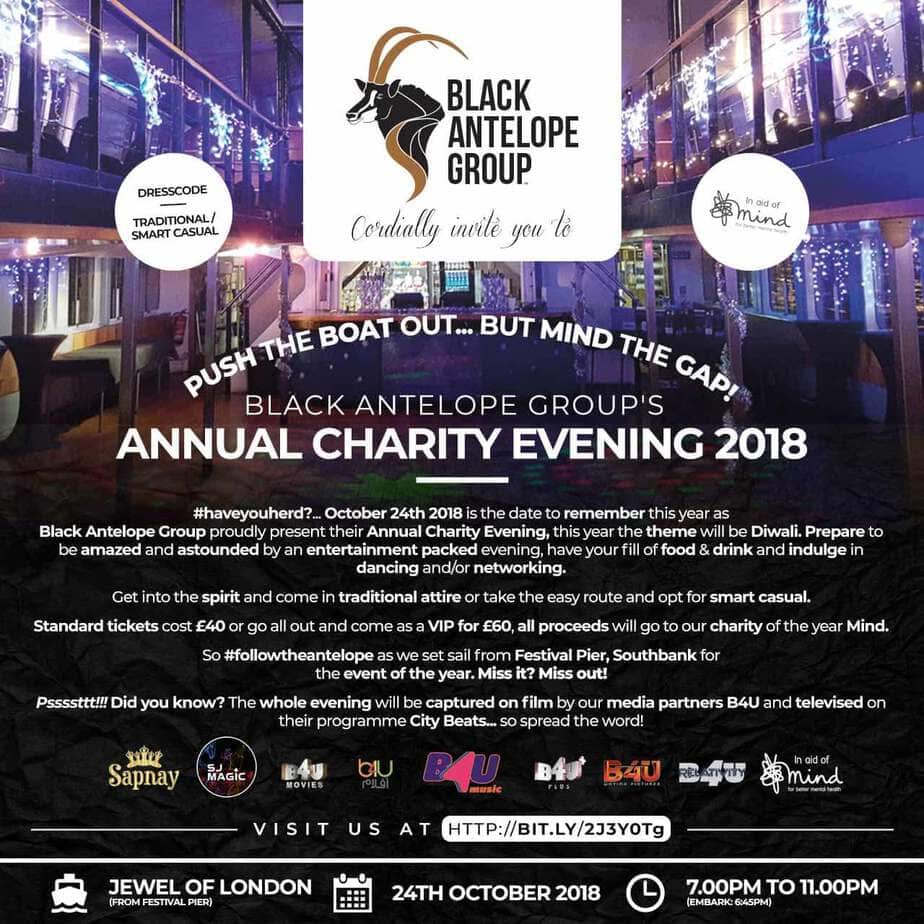